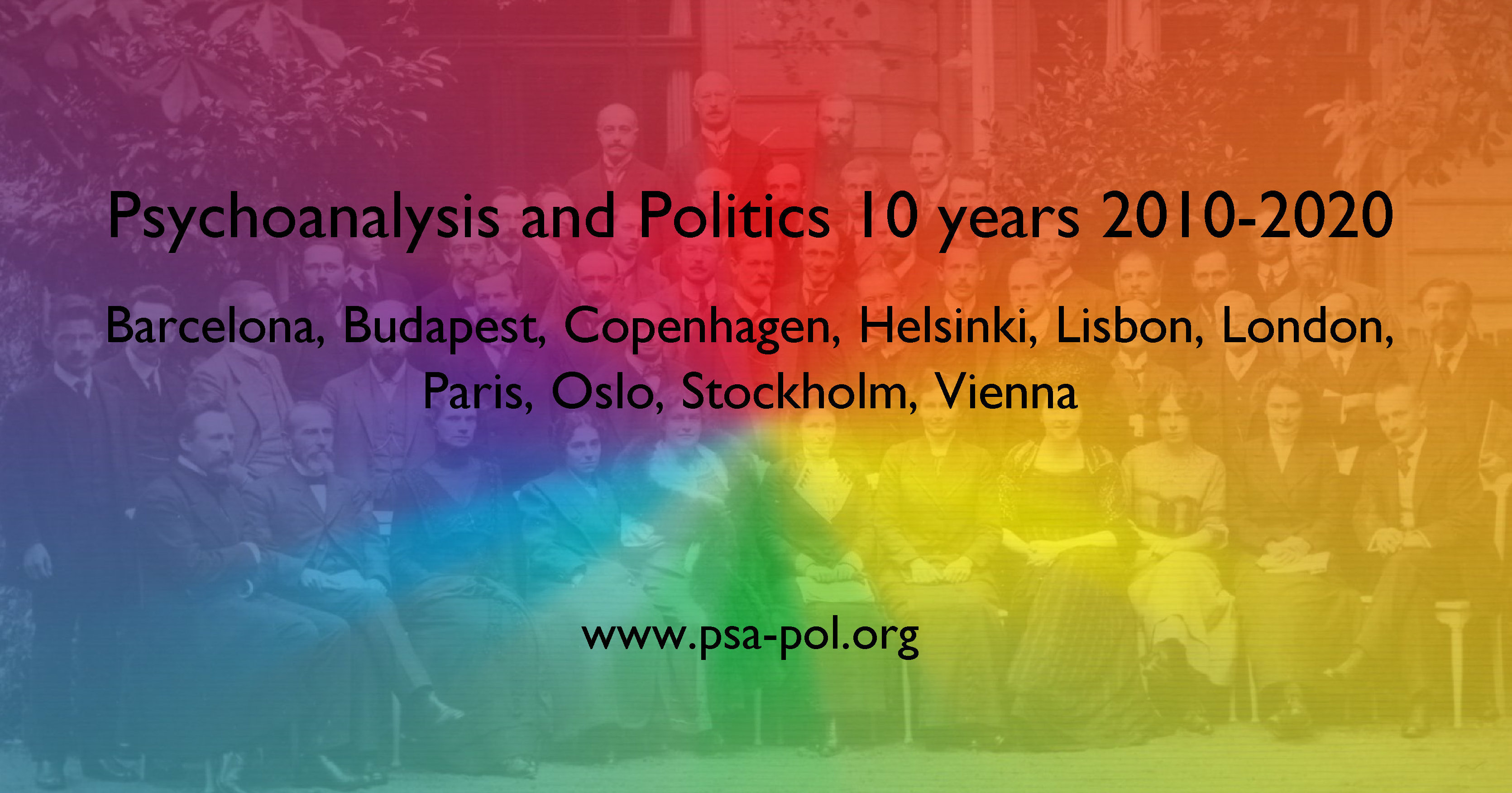 Psychoanalysis and Politics participants look back on their experiences of
these first ten years:

Dr Linden West, Professor of Education, and UKCP Registered Psychoanalytic Psychotherapist. Canterbury, England, United Kingdom
One of my early Psychoanalysis and Politics Conferences was in Vienna devoted to Solidarity and Alienation, and Structures of Hope. It was quite an occasion, for many reasons. There was the Conference itself, the standard of which was high, including presentations, discussions and the quality of engagement with difficult issues. The spirit was participatory and egalitarian, rather than stuffy and hierarchical which can bedevil psychoanalytic, educational as well as academic conferences more broadly.  I talked about a new book of mine on racism and fundamentalism in post-industrial communities, and got useful feedback. Beyond the Conference, I visited Freud’s old apartment at 19, Berggasse and had a lengthy,  sometimes sad discussion with the curator who, it seemed to me, really wanted the London furniture back.  Vienna and the Hapsburgs had also been my special subject in a first history degree. Vienna’s often repressed, ‘hysterical’ bourgeois, anti-Semitic culture had so shaped Freud and his work.  And yet, in the light of the barbarity to come later, it represented, in certain regards at least, a reasonably tolerant multi-cultural society.

Then there was Paris and Anxious Encounters and Forces of Fear. It was good to be there too, and to speak some French to particular colleagues, although my confidence could vary, and anxiety stirred. Lisbon, the following year, was a delight and particular sessions brought tears to the eyes in stories of struggles to keep on keeping on. Stockholm, the year after, mattered too. There were a couple of papers directly referring to psychoanalysis and the Israel/Palestinian question, which I have been studying recently. Two unresolved traumas – the Holocaust for Jews and Al Nakba, or the Catastrophe of the loss of homes and a homeland for Palestinians, still haunt. The papers generated strong, complex and conflictual feelings. But then the psychoanalytic terrain is conflicted, and people can feel misunderstood by the other. Psychoanalysis encompasses such diverse, historically competing perspectives, while its clinical focus of abuse, trauma, repression and suffering asks not less than everything. These conferences matter precisely because we wrestle with such difficult and messy human matters, but most often in good enough ways, in the company of friends.

I first learned about Psychoanalysis and Politics trough my friend Anna Deutsch who works at the International Court of Human Rights based in Los Angeles. With great enthusiasm and anticipation, we attended the conference held in Helsinki in March 2013. Those days offered an intense and rich experience—an experience I had the good luck and opportunity to revisit each year since through participation in the annual conference.

It is with much gratitude and appreciation that I write to congratulate Lene and to thank her for the enormous amount of work and effort she has extended to keep this interdisciplinary forum alive, something so necessary in these times.

Over the years she has created a reflective space where international scholars and professionals from differing backgrounds can gather to debate contemporary psychosocial issues with freedom and respect.

Each annual conference, held in a different European context, initiated rich dialogue and deliberation around a set of issues grounded in actual social circumstances. At these meetings,  psychoanalysis and politics were mutually enriched.

Certainly this initiative has a promising future and I look forward to the years to come. I welcome continued and deep engagement with colleagues as we grapple with the complexities and uncertainties that characterize the diverse, but also shared, experience of living together in the contemporary world.

My first Psychoanalysis and Politics conference was in Helsinki, in 2013. I’d never before been to a conference like that one, and left looking forward to the next. I’ve been to several since, in other cities across Europe. The participants come from many different places and a range of disciplines—psychoanalysts and psychotherapists, social scientists, literary theorists and philosophers—and also people who’ve been directly in the path of major political developments. This diversity has led to lively discussions and a rich cross-fertilization of ideas—there’s something to learn for each of us. Importantly, each conference is small—only about 40 people—with only one presentation at a time, which everyone goes to. There’s adequate time for discussion (and coffee) after each talk. Everyone eats dinner together, and often breakfast and lunch; discussions that begin in the seminar hall continue over meals and afterwards, and into the next day’s events. And there’s a real group feeling, and a lot of warmth—always enough “old-timers” for a sense of continuing community, and new people whose presence opens the dialogue in unanticipated ways. These are my favorite conferences.

This important and regular conference is a great tool for psychoanalysts, therapists, social scientists and even politicians to develop thinking.

Psychoanalysts in their Societies can no longer keep the political and social environment at a distance as if that protects the clinical dialogue. Depth thinking is especially needed for the aftermath of the pandemic, which has revealed huge fault lines of racism, anti-semitism and the neglect of societies’ poor.

The pandemic leads to ideas of re-forming the world. Ten years of Lene Auestad’s Conferences are to be celebrated and they will help us think deeply in post Covid times. Congratulations on this milestone for PsA and Politics.