Today somebody in my building suddenly died.

On a recent Thursday evening, a few days before, in cities, towns and hamlets all over the UK people gathered by open front doors, windows and balconies in their locked down homes to applaud by extensive clapping the doctors, nurses and ancillary workers of the NHS. Some even were heard to blow trumpets!

It was a spontaneous event emerging from emails, twitter, Facebook and street gatherings on WhatsApp groups- our modern non-touch communicative tools. And it was done to honour our present day heroes, manning the clinics and hospitals, all on an emergency footing to protect, trying to keep our citizens with Covid-19 alive if possible.

Yet the emotionality behind this pleasurably impressive outpouring of rapture had a shadow. It was becoming clear from several accounts, often unattributed, from nurses and doctors that, being on the front line, they expected some colleagues to die, having caught the virus due to their close proximity to disease. That, as part of the medical ethic, they were prepared for, but to do so without the necessary protective armour was almost too much to bear to hear. The British Medical association today wrote “The continued failure to provide an adequate supply of personal protective equipment to health workers is putting doctors and patients alike at risk of serious illness and even death “ (BMA member update 30/3/20).

It brings to mind the Spartans at the battle of Thermopylae in September 480 BC. Some 5-6,000 Spartans, Thespians and Helots rushed to the very narrow pass at Thermopylae, which was the only road, in order to contain the invading Persian army of 150,000 troops. Vastly outnumbered, they held their ground for 7 days. Leonidas, the Spartan King, aware that his small force had been outflanked by a betrayal, dismissed the bulk of the Greek army, leaving just 300 Spartans and 700 Thespians as the front line, to fight to the death. This gave time for the Greeks to gather their forces to defeat Xerxes later at the sea battle of Salamis, when the Persians withdrew, losing most of his forces in the retreat. 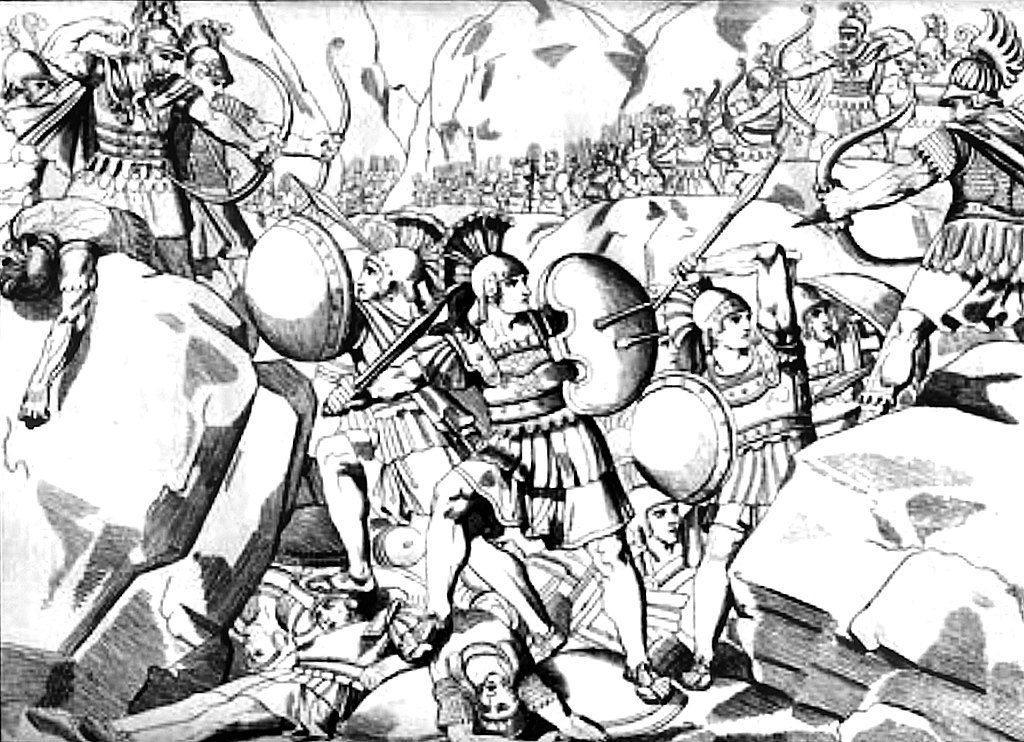 Ever since mythology has taught us of the profound value of selfless sacrifice at certain times of national crisis. At least the Spartan citizen warriors went into battle fully armed. Our front line medics and nurses are not properly protected as the cry is heard in so many countries around the world, from small to the biggest countries, for more masks, gowns and gloves. Also needed is thousands more intensive care beds and respiratory ventilators in every country. The world watched China in amazement as it built hospitals from scratch. Did we transpose that extraordinary idea to build new facilities in Europe, the US and what about the continent of Africa? Looking back all countries seemed to imagine that the problem was over there, in China. The World looked on with a critical eye but without much intelligence that a virus does not have to show its passport at the border to enter all our states. What complacent narcissism our leaders mainly took. Did any country start building new contagion hospitals in January 2020? We basked in the pleasant thought that ‘it’ was over there and not here. This easy enough unconscious defence apparently protects us by the phantasy that the bad is somewhere else than with us. The splitting in the mind between us and them, a potent force for denial can be found in many, perhaps all of societies’ deep conflicts. I mean racism, misogyny, anti-Semitism that sucks up our hatred and locates it elsewhere in certain groups of citizens, or abroad. . If the virus had been discovered first in America or Europe would the same laxness applied? I think that the contagion would have been more psychologically understood as potentially affecting all of us, rather than something alien and imagined in part as an unconscious phantasy of a’ Yellow Peril’ of political and economic concern about the modern strength of our neighbour China. Trump, of course, in his usual way of wanting to take down and humiliate any opponent spoke of Covid-19 by a different name – the Chinese virus. It belongs to one nation who are giving it to the rest of us is his explicit message, leaving himself squeaky clean as the virus has not much to do with the US President. The Yellow terror is a colour metaphor that East Asians are an existential threat to the Western world. It is a racist trope that uses an ominous existential fear of a faceless horde of…well really this is a description of the new virus that we cannot even see that knows no boundaries of nation states. Even the borderless European Union is presently in fear of infection from its neighbour states as they close borders to each other. This may be right in trying to isolate communities, but it can breed rivalry and nastiness between allies when we all need to help each other, even applaud each other’s great struggles with the same viral enemy.

But where is the death in the title? Well, first I want to see through the subject of narcissism and with it the projection of bad elsewhere, anywhere but in me. We are usually lulled into thinking too little about death. Looking at our image as reflected by the water allows us to avoid seeing a larger picture beyond one’s reflection. Now the full horror of huge numbers of dead cannot be avoided.

In the shadow of the wonderful applause for our courageous health service workers lies the thought that some, perhaps many will, like the 300 Spartans, have to die in their mission to help most of us survive. Without the medical front line, accepting the very ill for triage, there would be total chaos in the country. Yet we know that a real price will be paid with the rising numbers of Covid-19 deaths of medical, nursing and ancillary staff at the front-line.

Were we not applauding their courage to be standing in that place where they too might die? As of the 30 March 25% of British doctors are off work, sick or in isolation themselves or with a family member ill due to coronavirus. ‘ At Columbia University Irving Medical Centre in Manhattan half the intensive care staffs are already sickened by coronavirus’. In China more than 3000 doctors were infected, nearly half in Wuhan. In Italy, the number of infected health workers is now twice the Chinese total, and the National Federation of Orders of Surgeons and Dentists had compiled a list of 50 who have died. Nearly 14% of Spain’s confirmed coronavirus cases are medical. (New York Times by M. Schwartz 30/3/20).

Today somebody I knew in an apartment in the block that I inhabit did not wake up from his last night’s sleep.

Suddenly a door opened to the actuality and reality of death. This was not the near incessant run of news from afar that I am listening to less and less. My doorbell had rung and it was the London ambulance. They asked if I had called them and I said that I had not. I was perplexed that it was not the post or an Amazon delivery of books, my phone soon rang and my neighbour told me the news. I knew that he had had serious heart disease. The ambulance crew, arriving in four minutes later told me that he and the person living with him had both been coughing in recent days and they suspected a Covid-19 death. My first thought was ‘and it’s in my building’! The other man was a very vulnerable character able to make a cup of tea, but not much else, and had had his autistic life looked after for many years by his now deceased friend. The ambulance crew and police, who had to attend a sudden death, if only to rule out the rare possibility of murder, had not grasped the alive mans fragility. His very distraught sister, in her 70’s rang, as her brother declined to pick up her calls. Knowing his presumptive diagnosis, she knew she was not able to bring him to her nearby home. The daily delivery of meals is now difficult in the city due to excess demand. But more to the point where do Social Services look after well Covid19 patients unable to manage their own lives by themselves? So much for opening a Pandora’s box of impossibilities. I was struck by the actual tragedy, not as usual far away but in my own house and my own front door, was in use by virus carriers. Did I have to urgency to move out to become a displaced person? Chaos needed a moment of quiet reflection as well as the good advice of a colleague in case I had missed out on anything out that was dangerous to my own life.

Curiously I had over the last few days been pondering on how 16 Century Venice had dealt with contagion from carriers of disease from far away lands, in the sailors, merchants and traders coming daily to the great city. The plague of 1576-77 killed 50,000 almost a third of the population. In 1680, the Bubonic plague killed 80,000, with 595 Venetians killed on October 9th that year. Later the Venetians set up a quarantine Island, Poveglia in 1776 to house those suffering the plague, and it is interesting to note, it morphed into a mental hospital in 1922, which closed in 1968. It became a checkpoint for all goods and people coming to and going from Venice and acted as a temporary confinement station. It is thought that over 100,000 persons were buried in plague pits on the island.

Now every Accident and Emergency hospital unit is a Plague Island. But what facilities are there in social services to look after the Corona infected well who cannot look after themselves? The policeman I discussed this possible provision with wondered why the Plague Island in Venice did not have a well-known   modern day counterpart in London. Not knowing, our house and the ill person’s relative were left waiting to know, whilst the dead man quietly lay in his bed in the flat.

I had been on a journey beneath the endless news descriptions on Covid-19 to realise my being touched by this story is multiplied by the many of personal human stories in their thousands in countries all around the world. These sad human stories suddenly happen, like the angel of death visiting the Egyptians with the tenth plague, the death of the firstborn, for failing to let the Israelites leave. Death passed over (hence Passover) the Israelites who had painted a sign in lamb’s blood on the door lintels of each Jewish household.

However many tragically die in the UK of covid-19, today the possible number from the Government is perhaps 20,000, it is important to note that the number of registered deaths in 2018 was 541,000.I have deliberately merged the daily news about death of citizens and doctors with what happens to the people in a block of flats when someone suddenly dies and we are near the eve of Passover with its potent myths about who will live and who will die (which is also represented at Yom Kippur when it is the death of the Jews, rather than the Other).