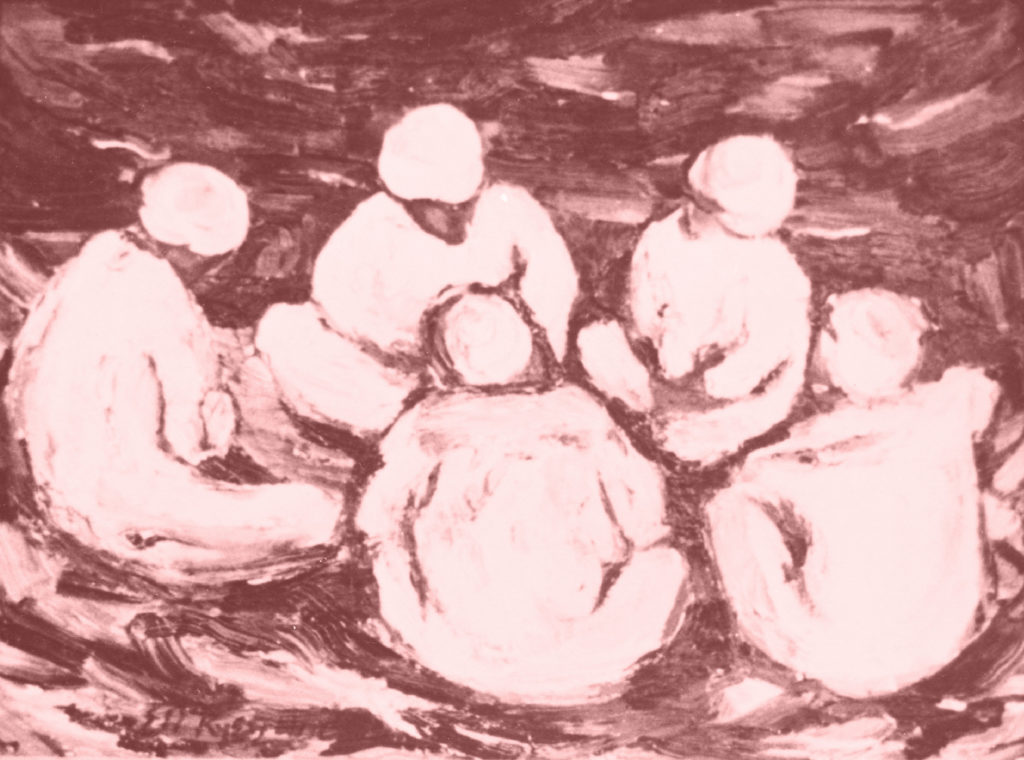 It was Anna O. who coined the expression “the talking cure”. Her real name was Bertha Pappenheim, and she later trained as a social worker and founded the Jewish feminist movement in Germany. A few years later, in 1889, “Emmy von N.”, whose real name was Fanny Moser, asked Freud to stop interrupting her all the time to ask where something came from, and let her tell him what he had to say. Freud fell in with her suggestion and found that memories could still be recalled in this manner, when she was allowed to talk spontaneously. This was the beginning of free association. Freud formulates this fundamental rule of psychoanalytic technique in terms of the injunction: “say whatever goes through your mind. Act as though, for instance, you were a traveler sitting next to the window of a railway carriage and describing to someone inside the carriage the changing views which you see outside” (1913). This form of inquiry is neither objectivistic nor subjectivistic, as it opens up for a subject which is decentred from itself, which is not already known and whose knowledge of itself is only imperfect and partial. From the other side, Freud recommends that the analyst “surrender himself to his own unconscious mental activity, in a state of evenly suspended attention, to avoid so far as possible reflection and the construction of conscious expectations, not to try to fix anything that he heard particularly in his memory, and by these means to catch the drift of the patient’s unconscious with his own unconscious” (1923). In Bion’s works a similar point is addressed with reference to Keats’ emphasis on “Negative Capability, that is, when a man is capable of being in uncertainties, mysteries, doubts, without any irritable reaching after fact and reason” – to bear the suffering and frustration associated with refraining from clinging to “fact and reason” in order to enable one to “relate to what is unknown both to him and to the analysand” (1970). These ideas may be formulated in terms of an ethics of not-knowing, of opening up to what is unknown both in oneself and in the other by staying with the unpleasure of uncertainty and being able to refrain from celebration of certainty, cleverness and achievement, which would assimilate the unknown to the already known.

This text is written on the occasion of the 10th anniversary of Psychoanalysis and Politics, an international and interdisciplinary conference series which aims to address how crucial contemporary political phenomena may be fruitfully analysed through psychoanalytic theory and vice versa – how political phenomena may reflect back on psychoanalytic thinking. Since 2010, conferences have been held in Copenhagen, Barcelona, Budapest, Helsinki, Lisbon, London, Oslo, Paris, Stockholm and Vienna, most often in the rooms of a friendly psychoanalytic society. In a move from a two-person situation to a multi-person situation, an idea of openness to new and different perspectives is maintained in a space for dialogue between nationalities, academic fields and psychoanalytic schools of thought, encompassing both clinicians and non-clinicians. It is a space which aims to enable everyone present to be a participant, rather than a member of a passive audience. In the context of pedagogy, the philosopher Hans Skjervheim formulated what he termed “the instrumentalist fallacy”, namely that of disregarding the distinction between technical actions, where there is a target as well as a calculus setting guidelines for how to reach the target in question, and practical actions, which take place within the social field and are founded in respect for other persons. Within the technological perspective, is his point, we make other people into calculable things. In a situation of this kind, “creating trust” is of little use, for trust cannot be “created”, it is not a question to which there is a technical solution. “In Kantian terms one can only act in such a way that one is worthy of trust, but one is only worthy of trust if one does not absolutise the instrumentalist perspective” (1992).

In describing her experience with teaching teachers, Isca Salzberger-Wittenberg wrote: “They are looking for instructions about what to do, wishing to learn about human beings, rather than from actual experience of others, afraid that their students and their own feelings will get out of control if they stop to look, listen and think. […] We thus had the opportunity of learning about the nature of the anxieties which beset the learner: fear of confusion and chaos in the face of unsorted ‘bricks’ of experience, helplessness in the face of not knowing, fear of inadequacy, fear of being judged stupid in comparison with others” (1983, 55, 57). Universities are environments which tend to reinforce such anxieties, in their emphasis on mastery, displays of brilliance, being in control and competition over winning an argument, defending one’s own position. It is a paradox that these spaces devoted to learning promote destructive structures associated with fear of not knowing, of uncertainty and doubt, thus posing a hindrance to thinking. “To destroy awareness of all feelings,” wrote Bion, “is indistinguishable from taking life itself” (1962, 10). In these settings, such destruction is at least partial, limiting the field of vision available for contemplation. To the world view inherent in CBT, emotion follows cognition, which follows an event. It is assumed that two rational persons ought to have the same emotional response to the same thing, and if they do not, there is something wrong with their rational capacity. Thus CBT treatment protocols aim to get these emotions back under control, “by using hyper-rationalist arguments to coax the emotions back into a rationalist cage” (Dalal, 2018, 112). This contrasts with the psychoanalytic view which posits unconscious emotional experience as a source of new understanding, and which acknowledges the validity of different emotional responses to the same situation, due to differences in people’s contexts, life circumstances and histories.

When emotions are thus seen as situated it enables one to take the sociological situation into account, and to be attentive to the workings of power differentials in who is considered, heard and taken seriously, and to question not just what feelings but also whose feelings matter. As Ervin Goffman put it, “a very eminent civil servant with a pretty taste in cynicism […] explained that the importance of feelings varies in close correspondence with the importance of the person who feels” (2008, 10). University environments tend to privilege white men of an upper- or middle class background, a preference which contribute to the choice of what kinds of knowledge and inquiries are valued and supported. Such preferences are enacted, played out, in conference settings, along with the preference for the known, either in the sense of the famous person or the familiar person as against the stranger. It is expressed in terms of the time allotted to different speakers – the keynote versus the shorter paper, in terms of whose questions are noticed and take up time in the discussion. It is also expressed in spatial terms, when a conference is divided between parallel sessions which take place in different rooms and keynote lectures, where everyone is gathered in one large room. This choice expresses a view of which speakers and which topics are most important and of which speakers and topics that are seen as belonging together – and which are kept apart. The spatial arrangement of a room may also place some persons higher up or further down than others, as well as directing the participants’ gaze, only towards a speaker or towards each other. In the Psychoanalysis and Politics conferences, all the speakers are given the same amount of time to present, and all the papers are presented in plenary, in the same room. The time frame is 30 min for the presentation itself and 20 min for discussion, 50 min in total, with a 10 min break in between each paper. The chairs are arranged in a U-shape, so as to empasise the dialogue between all the participants, and not just with the presenters. Thereby, representatives of different schools of psychoanalytic thinking engage with each others’ contributions, as they are not kept apart in different rooms. This set-up also establishes a dialogue between different disciplines on an equal footing, aiming “to keep both protagonists open to the other and reflexive enough to change as a consequence of contact” (Frosh, 2010, 37). This is why I would not refer to this activity as “applied psychoanalysis”, since the term implies that psychoanalysis is “put on top of” another discipline, rather than a mutual exchange where each discipline may learn from the other. The fact that these conferences shift between different countries counteracts the domination of one national frame of understanding, enabling encounters where such dominant frames are questioned when seen from without.

“Silence is the ocean of the unsaid, the unspeakable, the repressed, the erased, the unheard,” wrote Rebecca Solnit. “It surrounds the scattered islands made up of those allowed to speak and of what can be said and who listens” (2017). Psychoanalysis expands the field of what is sayable, and of whose voices are allowed to be heard and make sense. I agree with Barratt’s statement that “the final aspect of the radicality of psychoanalysis is that its method, which decontructs the forces of suppression and repression that are inscribed within us, necessarily issues into a momentum that is anti-ideological” (2019, 7) – though in a multi-person situation such as a conference space, such radicality relies on the variety of perspectives it allows for and the weight it assigns to each. To refer to Hannah Arendt’s view on participatory politics: “The reality of the public realm relies on the simultaneous presence of innumerable perspectives and aspects in which the common world presents itself and for which no common measurement or denominator can ever be devised” (1958, 57). In a world fraught with brutality and inequality, creating a sphere where more equal and open-ended speech may take place involves some form of closure as well as expansion. To cite Jill Gentile, most free speech advocates as well as psychoanalysts “recognize that not setting boundaries is as likely as setting them to leave us hostage to forces that have nothing to do with freedom” (2016, 120). In today’s political climate, with the growth of racism, Islamophobia, sexism and xenophobia, the far right aims to appropriate freedom of speech as a freedom to exercise hate speech. As I have argued elsewhere, there is every reason to suspect a claim to the effect that “my right to disrespect other people ought to be respected” (2015, 114-115). In fact, a community of thought with an intellectual and emotional openness between participants from a variety of backgrounds needs to be founded on a basis of mutual respect between them. This is why it says in the statutes that: “Disrespect or discrimination towards the forum or any of its participants on the basis of nationality, skin colour, ethnicity, religion, gender or sexuality will not be tolerated.” Such mutual respect is threatened both by older traditions with their ideas of social standings and of who has the right to be heard, listened to and understood, and by more recent attacks on democratic institutions and fora. Thus such spaces, oases, for joint reflection and exploration need to continue for the years to come. I look forward to the next ten years of growth, continuation and renewal for this international community of thought.

Lene Auestad is a Dr. of Philosophy, an author and translator, and the founder of the international and interdisciplinary conference series Psychoanalysis and Politics (www.psa-pol.org). She is an Associate Member of the Norwegian psychoanalytical Society.

Auestad, L. (2015) Respect, Plurality, and Prejudice: A Psychoanalytical and Philosophical Enquiry into the Dynamics of Social Exclusion and Discrimination. London: Karnac.

Barratt, B. B. (2019) Beyond Psychotherapy. On Becoming a (Radical) Psychoanalyst. London/New York: Routledge.

Freud, S. (1913). On Beginning the Treatment (Further Recommendations on the Technique of Psycho-Analysis I). SE, vol. 11.