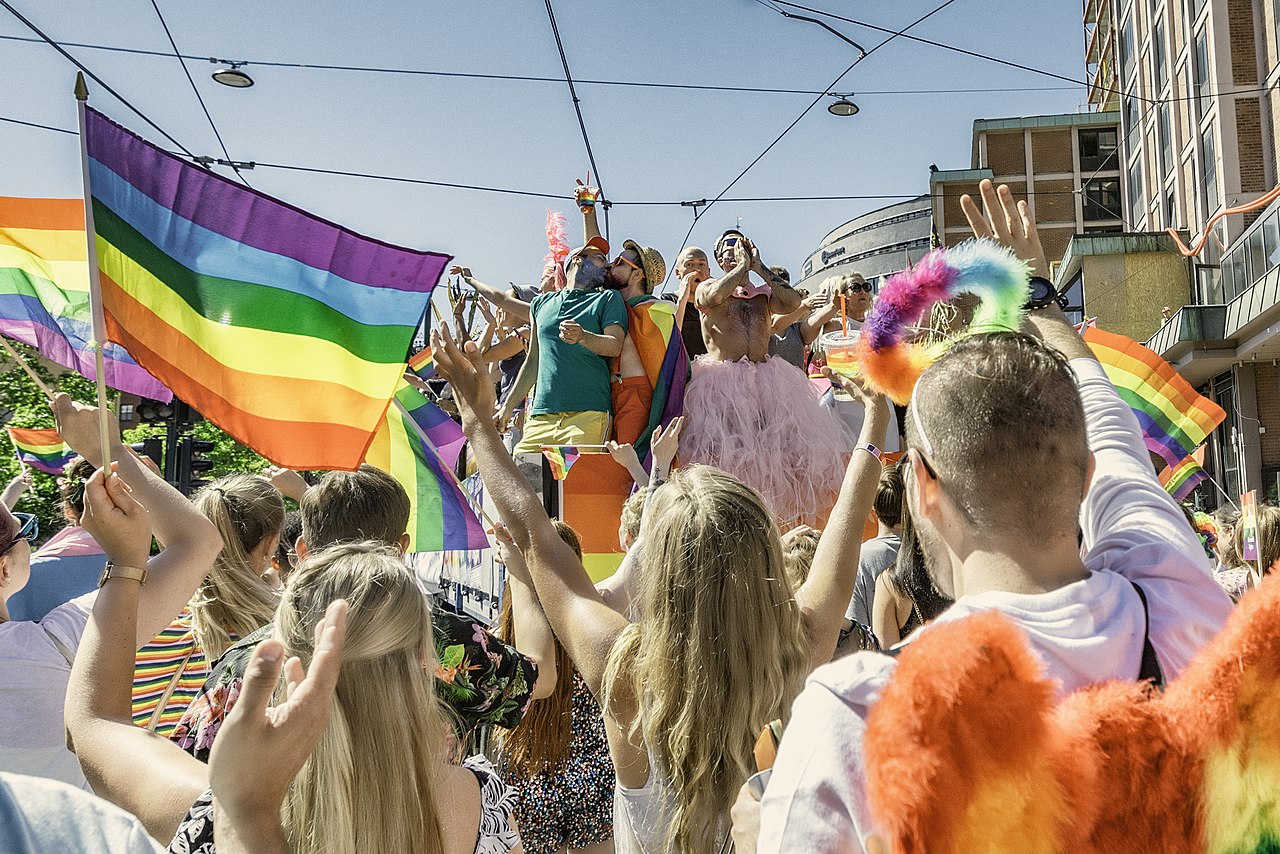 This morning I woke up to the terrible news that a shooting had taken place in the night at London pub – a gay bar in the centre of Oslo. Two people were killed in the attack, ten are seriously injured, and 11 people are reported to have less serious injuries.

The shooter is a 42 year old man, a Norwegian citizen, originally from Iran. He is now charged with murder, attempted murder and terrorism. He was known to the police and to the Norwegian Police Security Service (PST). After this attack, it has been declared this morning that the Oslo Pride Parade, which was due to take place today, has been cancelled.

I had been looking forward to take part in today’s parade. Oslo’s Pride Parade has been very large in previous years before the pandemic, with participation by many different sectors in society. This year’s parade was predicted to become the largest parade ever. This news is awful and terribly shocking.

“It is popularly believed that a human being is either a man or a woman”, wrote Freud in 1905 in Three Essays on the Theory of Sexuality, and continued, “Science, however, knows of cases in which the sexual characters are obscured, and in which it is consequently difficult to determine the sex. […] The importance of these abnormalities lies in the unexpected fact that they facilitate our understanding of normal development. For it appears that a certain degree of anatomical hermaphroditism occurs normally. In every normal male or female individual, traces are found of the apparatus of the opposite sex. These either persist without function as rudimentary organs or become modified and take on other functions.” (1905:141)

Although Freud never doubted the psychological importance of bisexuality, Freud’s thinking about the problem includes some reservations. The concept of bisexuality presupposes a clear grasp of the antithesis between masculinity and femininity. However, these notions have different meanings for biology, psychology and sociology–meanings which are often confused. The biological meaning is the clearest, and refers to people’s genitals. The most serviceable in psychoanalysis, states Freud, is the distinction between activity and passivity, and the sociological meaning is based on observations of existing people’s behaviours. But such observation shows that “pure masculinity or femininity is not to be found either in a psychological or biological sense. Every individual on the contrary displays a mixture of the character-traits belonging to his own or the opposite sex” (220).

Homosexuality, as Freud describes it, may be absolute, when sexual objects are exclusively of one’s own sex, amphigenic, when sexual objects may equally well be of either sex, or contingent, that is, variable according to external conditions (136-137). A person may alternate between these dispositions, and may also change throughout his or her lifespan, from one disposition to another.

He wrote, in 1915, that “Psycho-analytic research is most decidedly opposed to any attempt at separating off homosexuals from the rest of mankind as a group of special character. By studying sexual excitations other than those that are manifestly displayed, it has found that all human beings are capable of making a homosexual object-choice and have in fact made one in their unconscious.” In the last bit of that statement he is referring to people having loved both their parents as children. He went on state that “libidinal attachments to persons of the same sex play no less a part as factors in normal mental life, and a greater part as a motive for illness, than do similar attachments to the opposite sex. On the contrary, psycho-analysis considers that a choice of an object independently of its sex – freedom to range equally over male and female objects – as it is found in childhood, in primitive states of society and early periods of history, is the original basis from which, as a result of restriction in one direction or the other, both the normal and the inverted types develop. Thus from the point of view of psycho-analysis the exclusive sexual interest felt by men for women is also a problem that needs elucidating and is not a self-evident fact based upon an attraction that is ultimately of a chemical nature” (1905:145-146, footnote added 1915). So, according to this view, love is at first freely directed towards a range of different objects, or people, and then afterwards, social restrictions and taboos enter in, banning some objects, sometimes inflicting punishments – and to a greater or lesser extent changing the direction of the desire.

Our conference series creates a space where representatives of different perspectives come together and engage with one another’s contributions, participating in a community of thought. It is fundamental to this forum, as stated in our statutes that “Disrespect or discrimination towards the forum or any of its participants on the basis of nationality, skin colour, ethnicity, religion, gender or sexuality will not be tolerated.” During the later years, the LGBTQ community has been subject to attacks by far right movements in several different countries, both physical and verbal. We condemn such attacks in the strongest possible terms. We would encourage all our members and sympathizers to stand in solidarity with our lesbian, gay, bi, trans and queer friends and members, to stand up for the right to love the ones you love and to express this love openly and publicly, and to dress and present however you would like in public spaces.

Lene Auestad for Psychoanalysis and Politics

What happened next yesterday: I took a walk down to the centre, and I was on the ground floor in Glasmagasinet department store when I heard sounds outside, so I stepped out onto the street. I saw the people in Salam Norway, the organization for queer Muslims, at the head of the parade – they and others had decided to march after all, after the larger, official parade had been cancelled – so I decided to join it. It was a large parade (a few thousand people), and everyone shouted “Kampen fortsetter” (the struggle continues”) and “We’re here, we’re queer, we won’t disappear”. Finally, there was a minute of silence, and everyone put down flowers near London pub. It was very moving, and thanks is due to Salam and others for putting together a parade after all. This is a short video clip I uploaded to Twitter: https://twitter.com/LeneAuestad/status/1540669359403651072